Ampere Primus Electric Scooter: It features 3 Kwh LFP battery technology with smart BMS, Stage 1 compliant and AIS 156 compliant. The scooter has a top speed of 77 km/h, it can accelerate from 0 to 40 km/h in just 5 seconds. 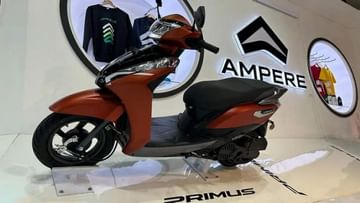 Greaves Electric launched a cool electric scooter at Auto Expo 2023. The new scooter is called Ampere Primus E-Scooter. It is this company that launched the Ampère e-scooter, an electric two-wheeler that is extremely popular in the country at the moment. The domestic electric vehicle manufacturer showcased its brand identity to the world with the new model at the Auto Expo. Now the company aims to establish the brand on a stronger footing with the new electric scooter. Additionally, the company showcased two other electric scooters called NXG and NXU at Auto Expo.

The Ampere Primus electric scooter caters to different categories. This is a high-speed B2C e-scooter, brought to the modern generation of people. It features 3 Kwh LFP battery technology with smart BMS, Stage 1 compliant and AIS 156 compliant. The scooter has a top speed of 77 km/h, it can accelerate from 0 to 40 km /h in just 5 seconds.

The Ampere Primus e-scooter features a 4kW mid-motor with efficient high torque. This electric scooter can offer a range of up to 100 kilometers on a single charge. It has four driving modes: Eco, City, Power and Reverse. Key features include Bluetooth connectivity and navigation, which will work with a mobile app.

There’s plenty of leg room, a wide seat, mature handling, which all up the comfort quotient of the e-scooter. The Ampere Primus e-scooter is available in four matte metallic colors – Himalayan White, Royal Orange, Havelock Blue and Buck Black. The scooter body panels are two-tone.

Meanwhile, the Ampere NXG concept electric scooter has IoT connectivity. Ampere NXU is another electric scooter, very useful for various commercial applications in the B2B segment. However, apart from the commercial sector, customers can also use this scooter in the personal sector.

After launching the ‘Save Local’ series during the pandemic, the West Town photographer follows up with business owners 2 years later