Hémant afternoon. Friday is a weekend. All the roads in the capital are almost empty. The crows arrive and take refuge in the Ramana trees. And on the other side, people breathe freely in Suhrawardy Udyan. Many also play cricket.

Kabir Suman put a comforting melody in the sweet season of autumn and winter. The capital’s roads met at the Institute of Engineers adjacent to Ramana Park. And the whole time seemed to be stuck in the melody of Kabir Suman.

So much soul in the air, who can match! Song and life story as if they were one whole. Suman was in a different mood to Safed Dhoti and Khaeri Punjabi. As if he was singing the song “It was a different day today”. This 73-year-old artist has captured the love he still needs, the love he can still give, with music and words. He said, “I always fall in love, I do.”

Kabir’s simple confession is also a response for many critics. There are many criticisms from the other side (India) about his change of religion and family. He said, “I’m a Naxal, I’m a Trinamool, I’m an apostate, so we’re discussing it on the other side. But I sing, it is not discussed.

Performing the song ‘Aami Chai’, he said, ‘When I recorded this song, my name was Suman Chattapadhyay. After that, Kabir Suman gave a sworn statement in court. Suman is the name given by my parents. Many people in India hate me because of the name Kabir Suman. Nobody hated me for doing this song when I was called Chatterjee. No one asked questions. Did not say, change the name. Kabir hates after doing Suman. However, there is no religion in the name of Kabir Suman. They didn’t understand that.

An era has passed since the arrival of Kabir Suman in Dhaka. He was not allowed to sing in the service. He left with pride. He then said that he would not return to Dhaka again. But where there is so much love, where there are so many people who love each other, no one can come there! Forgetting anger and insults, this singer came up with a song.

Although this time too he must suffer irony. The ceremony was to take place in the auditorium of the National Museum, but the police did not allow it. Only a day earlier, permission had been given to change the venue and hold the function at the Auditorium of the Institute of Engineers.

The three-day event was packed with Kabir Suman fans to celebrate 30 years of ‘Tomake Chai’. The first and last days were modern. The second day was Bengali Khayal. There was no room to catch moles on the last day of today. 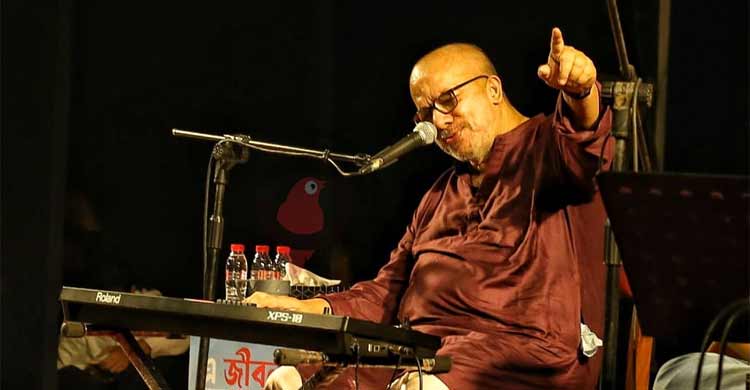 When Suman was singing, everyone seemed lost in the familiar tune. Many are overwhelmed with emotion. Sometimes there was no sound of the pin dropping into the fish in the audience row. Sometimes he sang to the tune of Suman. Everyone sang the song ‘Bashuria Bajaye Bashin’.

Kabir Suman is a fan favorite. He was from Dhanmondi. With two others. He said, “I fell in love with Suman when I was young. He is now in his forties. Love has increased so far. No artist could drive me crazy like that. Who else can sing such modern songs of love, rebellion and life! I’m more intoxicated by his attention. Being able to come directly to his concert was a great find for me.

From afternoon to evening. The evening passed and night came. He took a short break in the middle and kept it for four straight hours. The old man played the keyboard and voiced Sadhana-Bhajan. He performed solo almost the entire time of the program. The temporal tabla, the bass guitar and the accompanied pads, that too under the impeccable direction of Suman.

Although most of the songs were written and composed by himself, two songs written by Shahid Qadri and Enamul Kabir Sujan captivated the audience. After performing the song ‘Tomake Chai’, the curtain fell on the arrangement and Chira Joubana left behind the plea of ​​love.

Romantic Neerahua with Amrapali in the rain, video below