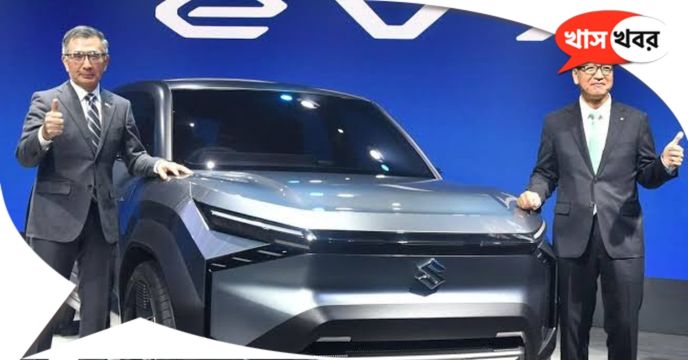 Khas Office: Auto Expo 2023 has been closed for the past 3 years due to the Corona outbreak. After finally overcoming the pandemic, the country’s biggest auto show, Auto Expo 2023, begins today. Auto Expo 2023 will be held in Greater Noida on January 11. The Society of Indian Automobile Manufacturers i.e. SIAM organizes this motor show in India every year.

Every year at Auto Expo, several commercial vehicles including cars, bicycles and electric cars with new features are launched. Also, this year Auto Expo 2023 will be held at India Expo Mart as before. It is close to Jaypee Golf Course in Greater Noida, Uttar Pradesh. Auto Expo Show Auto Component Industry will also be held at Pragati Maidan in Delhi.

India’s flagship auto show, Auto Expo 2023, on Wednesday saw the launch of Suzuki Motor Corporation’s new “eVX” electric SUV. This car will hit the market by 2025 The Concept EVX is a mid-size electric SUV designed and manufactured by Suzuki Motor Corporation (SMC) of Japan. It is powered by a 60 kWh battery, which offers a range of up to 550 km on a single charge. Maruti Suzuki presents its eco-friendly products like the WagonR Flex Fuel Prototype, the Brezza S-CNG and the Grand Vitara Intelligent Electric Hybrid.

The company’s CEO said they would take the approach to electric cars to a different level. The eVX is Suzuki’s first global tactical electric vehicle and makes its debut in India. In all, Maruti Suzuki is displaying 16 vehicles at the show, including the Grand Vitara, XL6, Ciaz, Ertiga, Brezza, WagonR Flex Fuel, Baleno and Swift. Biennial Auto Show which was to be held in 2022. It was held this year due to the Corona outbreak. Some of the big manufacturers like Mahindra & Mahindra, Skoda, Volkswagen, Nissan, Mercedes-Benz, BMW and luxury car makers like Audi are not participating in this edition.

Additionally, major two-wheeler manufacturers such as Hero MotoCorp, Bajaj Auto and TVS Motor Co will be limited to showcasing their prototype flex-fuel vehicles at the ethanol pavilion. This edition of the exhibition will be open for the press day on January 11 and 12 and the general public from January 13 to 18.

How to speed up the smartphone

Adani Group: World’s Best Indian Stock Market 2022, Courtesy of “Ekmebadvitiyam” Gautam Adani! – india is set to rank among the best performing stock markets in the world this year thanks to adani group details

Amazon cloud services will be available in Bangladesh